The aim of this research is to explore a more direct pathway between human operators and robots through brain computer interface specifically for advanced manufacturing applications. Human cognition or specific think of action are identified by non-invasive sensors and used as command or control input to the robot. The applications include assembly robot, welding robot and pick/place robot.

Previously, we developed an interface for pick robot. The robot picks defective parts out from a moving conveyor according to observer’s identification result. We use a camera to make each industrial part flashing on monitor with a specified frequency after it was identified and labeled in image. The defective parts are determined through observer’s SSVEP.

In the current stage of the research, we are focusing on developing ‘actemes’ to simulate welding process with a youbot holding arc welding gun. (‘Actemes’ are basic commands such as move up, move left, rotate etc.) The first task is using motion action thinking, the user can control the robot end-effector to draw a desired trajectory. Second task is analyzing cognition, the user can control the welding quality when robot moving through the trajectory. The welding process and quality evaluation is based on virtual welding training simulator. 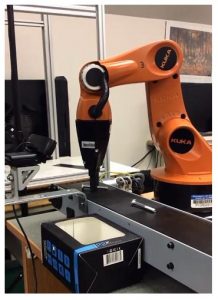 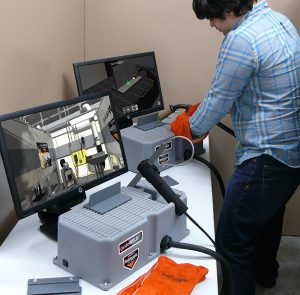